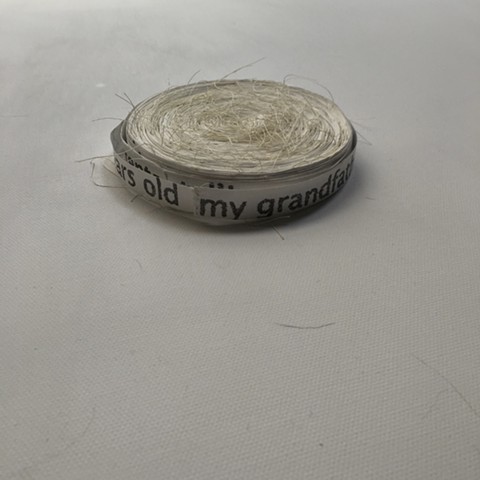 In the summer 1993, after my grandfather passed, I decided to make a book about this. I chose a scroll to be the form of my book because I realized the trees there were planted in a spiral fashion. I decided that this book would be 3/4” high printed onto linen with hand-hemmed edges on both sides of this scroll. I didn’t know how long the book would be but after it was finished it was a bit over 125’ in length.

It has been shown many times over the years in myriad ways from keeping it in the scrolled form to stretching it in and around the walls about eye-level high until it ended. Once I allowed the beginning of the book to be hung by the ceiling only to drop down into the spiral of the remaining of the book.

Curiously, after hearing this story about these birch trees, many people and friends and even family, wonder if my Cosmos pieces were somehow and somewhat related by the spiraling arrangement of these trees so long ago.