..........artist statement People have such strong memories associated with certain clothing. They keep them for a reason. I'm taking a memory and making it more precious to them. I stand back in this process and let people tell me their stories. Their stories are just as important to them as mine are to me. This work is experiential in it's very nature. I produce miniature clothes as an intimate homage to acquaintances, and friends. Each surrendered garment becomes a miniature portrait of the individual it represents. All are hand-sewn. I use as much of the original seams and hems to keep as much of the integrity of the original as I possibly can. These pieces become precious in a way that may not have been previously conveyed. Through miniaturization, the originals are transformed in a way that lends a positive experience to the person who surrenders the garment, keeping intact the memory of each piece while allowing the viewer to explore the reasons and ideas of transitions in time and place.

..........others have said His miniature commissions are among the most powerful art works I have come across. In them, Jon takes items of a client's clothing and reproduces these in miniature and then sets them alongside other items of miniaturised clothes. Collectively, they become a memory of ourselves and/or those around us. -Haydn Shaughnessy, Gallerist Cork County Ireland

"House and Garden: Twists on Domesticity," (Andy Warhol Foundation Grant) curator, Anne Arrasmith Space One Eleven, Birmingham, AL (catalogue with foreword by David Moos) Coffelt's miniature clothes - each garment a portrait of a distinct individual - merges the feminine, domestic chore of sewing with the act of painting. Instead of relying upon his customary paintbrush and wooden panels, Coffelt is creating surrogate paintings with these patterned garments. This painterly emphasis, stressing the color, texture, weave and gloss of his chosen fabrics, is what separates Coffelt's undertaking from the painstaking labors of a miniaturist such as Charles LeDray. And like Beall, who often makes works in response to personal circumstances, or events, Coffelt produces clothes as intimate homages to acquaintances, and friends. - David Moos, Curator AGO (Art Gallery of Ontario), Toronto CN

"The Longest Winter," curated by Gean Moreno, critic, Florida Atlantic University, Damarys Ocana Boca Raton, FL Coffelt sews, and if the story that he made his Clothing series while bedridden is to be believed, he fits into Moreno's idea snugly. The miniature items -- among them a flowered party dress, a shift, a fringed cowboy jacket, striped pajamas -- are the kind of obsessive, fetishistic work that, once discovered in some serial killer's home, addles the neighbors' evening news sound bites that though ''he was nice and mostly kept to himself, ''they knew all the time that there was something weird about him. -Damarys Ocana, Miami Herald, Miami FL

"Tiny Treasures" The latter, a series of immaculately hand sewn miniature garments, will be on view starting Friday at Space One Eleven, 2409 Second Avenue North, along with work by Karen Rich Beall and Carolyn Wade. Titled "House and Garden: Twists on Domesticity." Perfectly finished inside and out -- except for buttonholes, which proved impossible on the tiny scale that became his world -- each article took him about eight to 10 hours to complete. They're entirely sewn by and, although Coffelt does admit taking advantage of preexisting features, such as hems, when appropriate. "Doing these by hand is a commentary on our society," Coffelt noted. "Just about everything can be made by a machine, I chose the hard way to do this." -Nancy Raabe, The Birmingham News

"Familiar Reality: A Celebration of Alabama Art," curated by Georgine Clarke, Alabama State Council for the Arts, Montgomery, AL Although at first glance the casual observer may assume these garments are skillfully sewn doll clothing, they are not. The artist refers to them as "relics", "soft sculpture", or "memory clothes." Each article originated as a vision Coffelt had of a particular person. This installation might be viewed as a type of quilt, a collage of treasured fabrics and memories. Each object provides thoughts about the significance and symbolism of garments as they represent the people who wear them. -Georgine Clarke, Art Gallery Director, Alabama State Council For the Arts, Montgomery AL

2006 Dolly Parton has one of my miniatures. I presented it to her on one of concert trips to New York City.

2008 I was commissioned to miniaturize a cashmere beaded sweater for Frank Lloyd Wright's daughter, Catherine Wright who was the mother of actress Anne Baxter. The black beaded cashmere sweater was bought in Beverly Hills in the 1930's and the beads are real pearls.

2009 "The Makings of Memory," curated by Mia Kaplan, Ammo Arts New Orleans, October Please note the Lawson sister's (Barbara, Becky and Betty) mother's dress that she wore at 4 years old is part of this exhibition. They presented this dress to her for her birthday in Feb 2010. 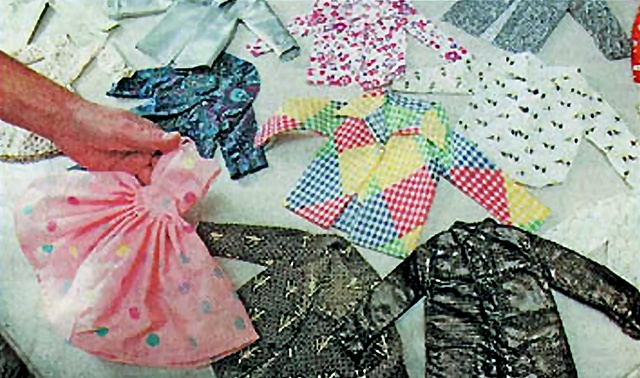 Miniature Clothing Project
1993 to the present
< previous next >