419-420 James Curtis Johnson, jr. was born on October 4, 1955 at the University Hospital in Birmingham, Alabama. His father, Jim, was a senior student at the University of Alabama Medical School. His mother, Sally, was employed in Cancer Research at Southern Research Institute. Curt became the first born in a family of very creative people. His sisters, Susan, and Sally Ann, and brother, Mark, were born during the following nine years. The Johnson household rocked to the music of the two brothers from the time they were teenagers. Curt loved to visit his grandparents, Mittie Lee and Curtis Johnson, and enjoyed their garden. At nine months of age, his first word was "flower". As he grew into his childhood he loved his dog, Lulu, and later, the family dog, Sherlock. He learned to play chess at six, enjoyed collecting coins, and as he became a teenager he developed outstanding skills in soccer. He pursued an interest in photography at Indian Springs School, sang in the glee club there, toured Europe on both sides of the Iron Curtain with that group, and then graduated from Red Mountain School, still perfecting his ability with photography. He loved sailing on Lake Logan Martin. He attended Eckerd College and then graduated from the University of Alabama at Birmingham with a degree in math and physics. Always inventive, Curt made many beautiful artistic works, including stained glass, carvings, paintings, prints and wonderful musical compositions. He loved the sport of tennis, and was very gifted with rock climbing. Trips to climb took him to Joshua Tree National Monument and The Big South Fork on the Tennessee/ Kentucky border. The onset of his final illness, colon cancer, prevented him from completing a full scholarship for a doctorate in mathematics which was awarded to him. Until his last days he gardened, collected fountain pens, and spent as much time out of doors tending his transplanted wild flowers as he could manage. He died at home on Sunday, August 23, 2009, at ten p m. His family and many of his friends were with him until just before his final breath in the presence of his father. His beautiful guitar music will live on.I made this robe and small hat into miniatures in late 2009 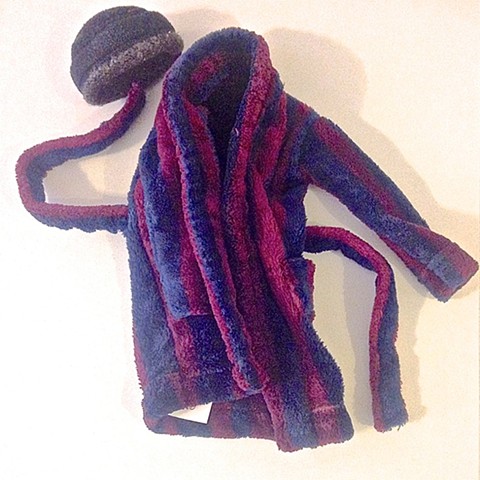