This is an artistic collaboration with Janet Hassinger My Mother, Mary Blank was known as the energizer bunny whose battery never ran down. She did it all, a family of 5 children and a full time professional volunteer. After her family was gone she worked full time , commuting to NYC from Madison CT. She began her career when a teenager,working in a doughnut shop. Her final position was running the kitchen for the headquarters of the worlds largest women's organization. She was the first in her family to graduate from college and became a registered nurse in 1934. She was dedicated to serving in many capacities and for many varied civic organizations. Mary finally served 30 years until she was 92 , as an elected member to the national board of Hadassah in NYC. The art clothing piece is perfect for her as she always dressed impeccably. Always in a skirt or dress with heels and makeup. She was a Bostonian from an immigrant family and wore her gloves with her hat . Mary was known for her wardrobe as well as her compassion, dignity and warmth. My Mother was an amazing woman. -Janet Hassinger Collection of Janet Hassinger, Texas City TX 2009 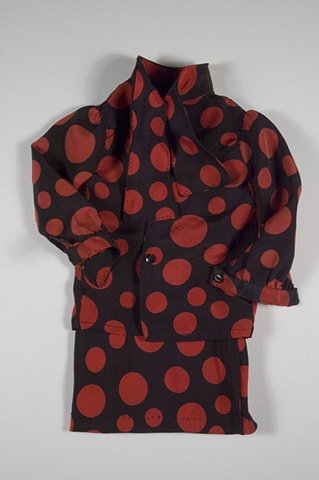